The Woman in the Glass 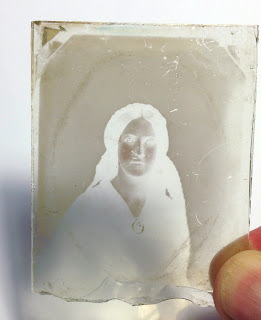 In the 1870s, a “dry” version of glass negative was created which was easier to use and required less exposure time.  These glass negatives were used for almost all types of photography until the late 1910s, when plastic negatives, known as “films,” were introduced into mainstream photography after 20 years of being inefficient and expensive.  Although the glass plate negatives provided better quality (more clarity of detail) than films, they were more difficult to use, so quickly fell out of use for mainstream photography. (Glass plate negatives remained in use for some professional photography until the 1970s and there is still a small group of photographers who use glass plates today for specialized photography.)

In performing this research, I realized that the glass plate I held in my hand was not, actually, a glass negative.  Glass plate negatives are extremely thin and very fragile.  Mine was thicker and more durable.  I wasn’t sure what to call what I had, but I did know that I didn’t get a very good reading of the figure depicted, so I set about making the image easier to interpret.


First I scanned the glass on my flatbed scanner, using a high resolution file size.  The result was a “negative” image that clearly had damage.  Scars and scratches abound, as you can see! 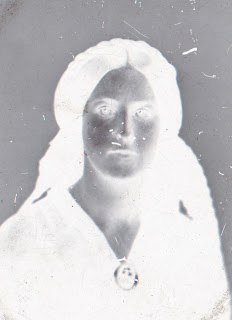 Next, I used Photoshop to reverse the image, using the “Invert” function, which essentially renders a negative image into a positive. 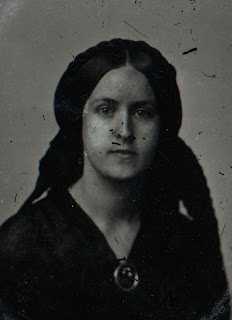 I then used image level controls to adjust the contrast and brightness to bring better clarity to the picture.  I expected a basic photograph that might not show too much detail, but was amazed at the clarity and, frankly, the warmth of this handsome image.  But there was all that damage! 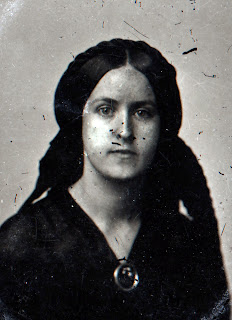 Finally, I used retouching options to clean up the scratches and blemishes, to produce this wonderful photo of a striking young woman. 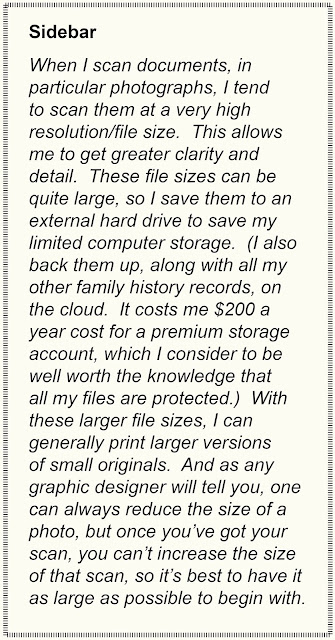 I still don’t know who she was.  She was found among documents related to my Rowland line.  I reviewed my female Rowland ancestors from the 1850s through the 1910s who could have been about the same age as the young woman in the photo, there are only a few possibilities.  And I already have photographs of them all.

I performed a Google image search which produced no results (if you haven’t searched Google using an existing image, it’s a nifty tool: you drag the photo you’re searching to the image search field and it will search for matches to that image).

If she is a relation, she would be a sister to someone in that line, with a surname of Rowland (from western Massachusetts), Gould (from Portland, Maine), Burdick, or Carr (both from Newport, Rhode Island). I also searched these surnames on Ancestry for images, to no avail.

Now that I have the image cleaned up, perhaps I’ll be able to identify her one day.  If not, she’s a handsome mystery from my family documents. If any of my family members reading this recognize her, let me know!

I was prompted to post this now because of a recent Facebook post from the New England Historic and Genealogic Society from December, in which they explain the ambrotype, an early version of a photograph, of which this image is clearly an example!  It’s an interesting read and it helped me to understand exactly what it was I had in my hands.

Scanning and restoring old family photographs can be very rewarding!  I have done photo restoration from scans of family photos for all sorts of extended family besides my own immediate line.  It’s quite rewarding to allow relatives who had given up on old photos to see them closer to their original versions again.

It’s a good idea to save the original scans into high resolution files and then save everything to the cloud (see the sidebar above).  When you want to share the files you can always reduce the file size to email it.  But you can never increase the resolution (clarity) of a photograph once you’ve scanned it, so make them big!

I’ll leave you with one other restoration I did, this one of my paternal grandmother from her heyday as a model in 1930s New York City. 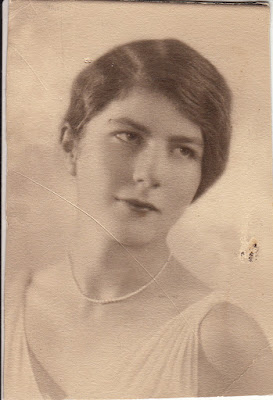 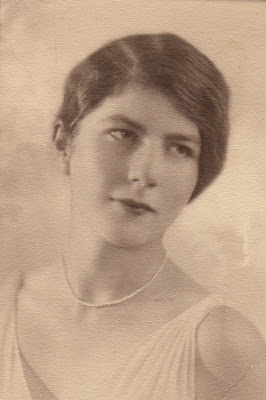 Posted by Daniel Woodruff at 6:01 PM

Email ThisBlogThis!Share to TwitterShare to FacebookShare to Pinterest
Labels: The Learning Curve, Who Were They?