400th Anniversary of the Mayflower Crossing and Proving (and Disproving) my Family’s Mayflower Connections, part 1 of 2

2020 marks the 400th anniversary of the Mayflower crossing to New England. Commemorations of the voyage’s quadricentennial (I had to look that one up!) began several years ago, with a number of organizations not only focusing on the original passengers, but also on their modern-day descendants. A number of organizations are taking a hard look, too, at the impact of the Pilgrims on the native Wampanoag Nation. The current worldwide COVID-19 crisis has put a halt to most of the events planned for 2020, but some (like my college reunion this year) may be postponed until 2021. Others may go online.

Note to my family members: The Woodruff line of my family does not have any Mayflower connections that I’ve been able to discern, and given that I have traced the Woodruff line back to the days of the Pilgrims, it is unlikely that one will emerge. The Mayflower descent outlined below is through my mother’s family, so it applies to my mother, my brother, his son, our maternal first cousins, my mother’s maternal first cousins (full and half-cousins), and me (and many other extended family members too).

About the Mayflower Crossing 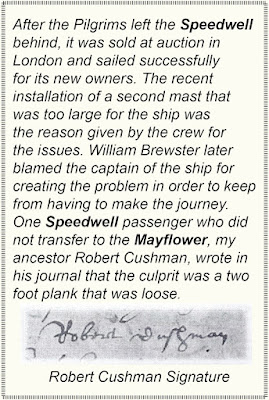 The Atlantic crossing was originally intended to consist of two ships, the Mayflower and the Speedwell. The Mayflower had been purchased in England and the Speedwell in Leiden, Holland, and the two ships met up in Southampton, England to commence their journey. The Mayflower originally had 91 passengers plus crew from England and the smaller Speedwell had 31 passengers, English religious separatists who had settled in Leiden during the preceding twelve years, plus crew.

The ships sailed from Southampton on August 5, 1620, but the Speedwell soon sprang a leak, so they docked at Dartmouth to effect repairs. The ships set sail again, but about 200 miles past Lands End, the Speedwell again began to take on water, so the two ships returned to Plymouth, England, where the decision was made to leave the Speedwell behind and make the journey with just one ship, the Mayflower.

Only eleven of the Speedwell passengers could be accommodated on the Mayflower, leaving twenty behind, and the Mayflower finally set sail from Plymouth for the third time, on September 6, 1620, to cross the Atlantic. By now, there were 102 passengers and an estimated 30 crew on board. The original passengers had never disembarked during the repair delays, so they had been on ship for more than a month by the time of the September departure. The captain of the Mayflower had refused to allow them to disembark for fear that they would abandon the journey.

The Mayflower voyage was fraught. Having used up precious stores during its one-month delay that were not replenished, it was not well supplied for the journey. Also, the delay meant that the now-overcrowded ship ran into significant gales in September at the start of its voyage, when it originally should have been nearing the end of its journey.

The Pilgrims intended to land and settle at the mouth of the Hudson River, but on November 9, 1620 they sighted land far north of the Hudson at what is now Cape Cod. The winter seas kept them from pursuing their southern goal and they finally anchored in what is now Provincetown Harbor on November 11. Landfall was made on November 27 with an exploratory expedition to scout suitable land for colonization. The sandy windswept spit of land was inhospitable and they had conflicts with the indigenous Nausets, so they made the decision to move to the mainland and establish a settlement there at a location that had been named New Plimouth several years earlier after a survey completed by Captain John Smith (not, as is often assumed, after the port of their last departure from England).

During the winter, when a contagious disease spread through the ship, many of the settlers and crew died, leaving only 53 Pilgrims and about half the original crew. The passengers lived on board the ship through the winter, building their colony and supplementing their provisions until they were finally able to disembark and take up residence on March 21, 1621, more than seven months after they had originally departed Southampton. The Mayflower then set sail on April 5, 1621 to return to England. The ship made excellent time due to favorable winds, arriving just a month later on May 6, 1621, and the Mayflower captain, Christopher Jones, reported the colony’s new location, no longer the mouth of the Hudson.


In September 1621, a ship, the Fortune, set sail from England to bring additional colonists to New Plimouth with the intention to then return to England with trade goods to sell on the settlement’s behalf. The Fortune arrived at the colony in late November 1621, almost exactly one year after the Mayflower had arrived at Cape Cod. This was a somewhat ill-conceived voyage. It brought no additional supplies for the colony, which desperately needed provisions, and the new settlers it brought were mostly single men, which caused a significant shift in the colony demographics, with single men heavily outnumbering the very few single women. My ancestors, Robert Cushman and his fourteen year old son Thomas, were on board. Robert Cushman had been the chief agent in London for the Leiden contingent up to 1620 and then acted as the Plimouth Colony agent thereafter.

The Fortune started a return journey to England with a valuable cargo to trade on behalf of the colony, but was taken by the French, who commandeered the goods, finally allowing the ship to return, with crew and passengers but no cargo, to London. Robert Cushman had returned on Fortune, leaving his son behind, in the care of William Bradford, governor of the colony. Robert died in England in 1625 without making a return journey.

After these challenging beginnings, the colony finally began to stabilize, put up sufficient stores for winter, and was able to establish successful trade with England and other colonies.

The impact of European exposure to the indigenous people of the region is another story entirely and one that is only now starting to be widely acknowledged. To understand more about the impact, this piece from The World on Public Broadcasting in 2014 is a good place to start: Public Radio: Native Americans Tell Their Side

There are numerous organizations that began 2020 with the intention of commemorating the Mayflower quadricentennial, but many of those plans have changed due to the current crisis. The General Society of Mayflower Descendants (the “Mayflower Society”) had planned a special Mayflower Congress in September 2020 to highlight the anniversary, but it’s not clear if that is now being planned as a virtual event. (In fact, their website doesn’t appear to have been updated since the COVID-19 crisis began.) Their 2020 Commemoration site [Mayflower Society 2020 Commemoration] was last updated in 2019.

In the United Kingdom and the Netherlands, there is an organization, Mayflower400, which organized events throughout different sites in the UK and in Leiden, Netherlands. Although many events are canceled or postponed, the organization has established a well-designed website with Mayflower stories, an interactive passenger list, and information on numerous European locations with Pilgrim ties. Even with the scheduled events in doubt, the website provides a wealth of interesting information about the Pilgrims’ origin stories. [Mayflower400]

The most comprehensive commemorative efforts I’ve found were already well underway in 2019 at the New England Historic and Genealogical Society (NEGHS) [American Ancestors]. They entered into agreement with the Mayflower Society several years ago to digitize the Mayflower Quarterly publication and to provide the fifth generation of Mayflower descendants online for NEHGS members. To begin their Mayflower commemoration, in 2019 the NEHGS commissioned and displayed a scale model replica of the Mayflower on the street in front of their Boston library. In addition, they have included an education program that focuses on the Wampanoag Nation, relaying the impact of the Pilgrims’ landing and making a solid attempt at providing an unvarnished history.

The NEHGS has created its own Mayflower webpage, with a lot of interesting interactive sections, including more information on the passengers, a map of the world with the locations/photos of current day Mayflower descendants, Mayflower descent charts and certificates, and a lot more. It’s a user-friendly site that also offers the expertise of the NEHGS research staff to provide Mayflower Society proof documentation, popular now, as interest in proving the Mayflower descent increases with the onset of a stay at home 2020. [NEHGS Mayflower]

And finally, Plimouth Plantation, the interactive living museum that depicts the lives of the Pilgrims and the Wampanoag in Plymouth, MA, is in the process of a complete refurbishment of the Mayflower II replica, a 1956 gift from the United Kingdom. The ship was scheduled to officially launch from its place of restoration, the Mystic Seaport museum, in spring 2020, but it is not clear that this has occurred. The sites related to the restoration have not been updated, and, although Plimouth Plantation is open to a limited number of visitors in outdoor areas only, the status of the Mayflower II is not clear from their website. [Plimouth Plantation]

The COVID-19 crisis has thrown many plans into disarray, but it hasn’t slowed the interest in this 400th anniversary. Indeed, it has likely channeled interest into more social-distancing appropriate directions, including a renewed interest in performing the online research needed to prove one’s own Mayflower heritage.

In 1915, my great-great grandmother, Elizabeth McLellan Gould Rowland (my maternal grandmother’s grandmother) wrote a family history, documenting her paternal Gould line and her maternal Chase line. She typed out three copies, added photographs, and presented them to her three children at Christmas that year. In this “Gould-Chase Book”, she recounts two different Mayflower ancestors.

In preparation for a maternal-side family reunion in June 2012, I decided that I would provide the family with all the proofs they would need to qualify for entry into the Mayflower Society, so I went about tracing and proving these two Mayflower lines.

First, the “Gould-Chase Book” outlines a descent from Mayflower passenger Francis Cooke through his daughter, Jane Cooke. Jane married Experience Mitchell (who does not have a Mayflower connection), and the family line through their son, Jacob Mitchell is detailed. In 1915, this descent was accepted as valid, and I’m sure many people were confirmed as members of the Mayflower Society on the basis of a descent from Jane Cooke and Experience Mitchell. 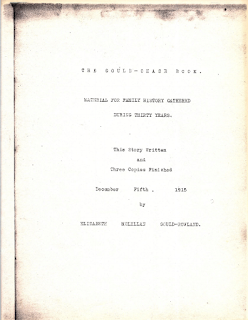 In beginning my research to prove this line, I discovered a 1973 article in the New England Historic and Genealogical Register which revealed that Jane Cooke died early in the marriage and it was only certain that Experience’s first three children were Jane’s, and, therefore, only those three children’s descendants can be attributed to her father, Mayflower passenger Francis Cooke.


Our descent is from Experience Mitchell’s fifth child, Jacob, who was born well after Jane Cooke’s death, to a second wife, whose first name, Mary, is all that is known about her. No one in the family knew about this more recent research disproving our descent from Francis Cooke until I unearthed it as I began to look for proofs.

In one fell swoop, with a few clicks of a mouse (and with less than an hour of online research), I had eliminated one of our two Mayflower connections! I’ve seen indications that the Mayflower Society continued to admit descendants of all of Experience’s children as late as 1983, but I doubt that they would accept such a descent today.

I still had the other Mayflower connection to research and review, but I was starting to realize that instead of providing Mayflower proofs, I might have bad news to report at that upcoming family reunion.

(Not-so-spoiler alert: as I’ve already made reference to a proven descent, above: I was able to prove that second connection.)

Native Americans get the change to tell their side of the Pilgrim story, The World, November 17, 2014: https://www.pri.org/stories/2014-11-17/native-americans-get-chance-tell-their-side-pilgrim-story

Posted by Daniel Woodruff at 7:17 PM