From its founding in 1902 to around 1952, the Three Arts Club in New York City served a noble purpose – to house young women who were pursuing careers in the arts.   The three arts referred to music, art and drama, and the Club provided dormitory style housing, meals and an environment in which these young women would be among people experiencing the same struggles and frustrations (and sometimes success).

According to an article about the Three Arts published in the Los Angeles Herald newspaper in 1909, there were four rules of admission (quoted):

Read more »
Posted by Daniel Woodruff at 7:58 PM No comments:

Email ThisBlogThis!Share to TwitterShare to FacebookShare to Pinterest
Labels: Historical Figures and Events, In Their Own Words, The Learning Curve

Getting Started and Getting Organized 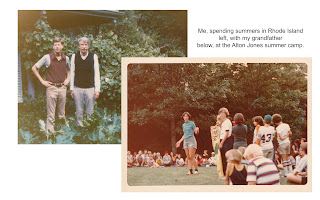 In 2006, soon after my maternal grandfather died (my grandmother having predeceased him by five years) my cousin Tamala emailed me a question: was it true that one of our ancestors had been a governor of Rhode Island?  As kids, my cousins and my brother and I all spent time during the summers with this set of grandparents in Rhode Island (although, because of age differences, not at the same time).  Our grandmother had told us all of the ancestor-governor, from whom she was descended.

Tamala asked the question of me, in particular, because she knew that all of our grandparents’ papers, particularly family history information, had been entrusted to me.  This seemingly innocuous question forced me to face a closet full of boxes which were not just from those two grandparents, but from my father’s side of the family as well.

Read more »
Posted by Daniel Woodruff at 4:55 PM No comments:

The Story of Annie Allender Gould

The Boxer Rebellion was a violent movement in China which targeted Christians, missionaries in particular, between 1899 and 1901.  It was initially a nationalist group (“Boxer” was the English translation for the name of this group) that pushed for expulsion of foreigners and their interests and eventually grew into a much larger movement.

When the Boxers finally blockaded the Legation Quarter of Beijing, which housed many foreigner delegations and missions, the Empress Dowager Cixi (believing that armed invasion to lift the siege was immanent) weighed in and supported the Boxers through an Imperial Decree “declaring war on foreign powers”.  This led to the killing of many foreigners and significantly more native-born Christian converts in China, mostly in the northern provinces near Beijing.

According to Wikipedia, a total of 136 Protestant missionaries, 47 Catholic nuns and priests, 53 foreign children and thousands of convert Chinese citizens were killed during the rebellion.  In all, between 2,400 and 2,600 people were killed after Empress Dowager made her proclamation supporting the Boxers.[i]

Annie Allender Gould was my great-grandfather’s first cousin and was, therefore, my first cousin three times removed.  She was also a Presbyterian missionary in China and one of the 136 Protestant missionaries killed by the Boxers.
Read more »
Posted by Daniel Woodruff at 8:49 PM No comments:

Email ThisBlogThis!Share to TwitterShare to FacebookShare to Pinterest
Labels: Historical Figures and Events, In Their Own Words, Who Were They?
Newer Posts Older Posts Home
Subscribe to: Posts (Atom)