Five years ago, one of my Woodruff first cousins was married and I struggled with an appropriate wedding gift.  I am the oldest of my generation by many years, with a whopping span of 32 years’ age gap between me and my youngest first cousin!  Our Woodruff grandfather died before I was born, and our Woodruff grandmother died when I was ten and my younger brother was six.  None of our Woodruff first cousins had yet been born, so he and I are the only two (out of eight of us) who have any memory of our grandmother.

Due to family circumstances, none of my first cousins had much exposure to our family history, but most of them have expressed an interest in learning more over the years.  I decided that I would create something for this cousin’s wedding that could act as an introduction to some of our shared past.


I wanted the gift to be appropriate to a wedding – it couldn’t be a big chart or a binder of pedigrees.  It needed to be something that would be both an elegant keepsake and also a meaningful glimpse into the past.

I settled on the concept of a photo album and I decided that I would include every ancestor for whom there was some representative photograph.  I knew that I had photographs of our grandparents and great grandparents, so, if nothing else, this would provide my cousin with photos back three generations, creating a connection with the past in a much more personal way.  In addition, I knew that I had a few photos from prior generations too, which would make the album even more interesting.

Beginning with my pedigree charts, I went down the list of every paternal ancestor and gathered the photos I have in my own possession, most of which I had already scanned. 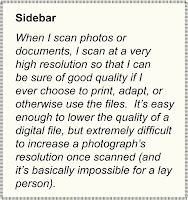 Once I had the list of photos in my own hands, I began searching on Ancestry.com and on Google to see if I could find any more representative photos for those I was missing.
I also decided to expand the reach of what to include in the album to paintings, so I would feature portraits of my ancestors in both photos and paintings.

I found more photographs and a few paintings on Ancestry, with the added benefit of meeting new distant cousins virtually.   The Google searches yielded some interesting results as well, revealing information and, in some cases, old photographs and paintings of more famous ancestors who may have had articles or obituaries written about them.  Two of the ancestors in the album even have Wikipedia entries!

I decided that I would search for every single ancestor in my paternal line, back to about 1500, around the start of the Renaissance, at which time portraits began to be representative of the actual likeness of the subject.  I ruled out paintings from the Medieval era or earlier, as they are typically interpretive and don’t show the true likeness.

All in all, I found 24 common ancestors with photographic or painted depictions.  I added in my cousin’s parents and was able to create an album with 26 ancestors.  In addition to the images, I also included biographical information to add context to each of the portraits.

Surprisingly, I was able to get back 13 generations, to our eleventh-great grandfather, Balthazar Bayard.  He was born around 1577, presumably in Antwerp, Belgium, and he died in August 1634 in Holland.  He was a Huguenot refugee and an ordained Calvinist minister, bringing in a fascinating connection to history and the turbulent Protestant Reformation of the 16th and 17th centuries.

Balthazar’s son Samuel married Anna Stuyvesant, the sister of the famous Dutch governor of New Amsterdam (later New York), Peter Stuyvesant, namesake of the Bedford-Stuyvesant neighborhood and numerous buildings, schools, etc. in New York.  Anna was a widow when her brother moved to the new world, and she and her children accompanied him there.  One of her grandsons, Samuel Bayard II, married Margareta Van Cortlandt, the daughter of the next-oldest portrait in the album, Stephanus Van Cortlandt, our ninth-great grandfather (Wikipedia entry here).

As far as the album itself was concerned, I found a company online that sells custom, embossed albums in varying sizes and formats, so I was able to personalize the cover and choose the optimal layout.  I opted for a landscape format with clear acid-free pockets that opened on the top and bound into the album on the short side.

I generated the highest-resolution files I could, cropped to fit standard photo print sizes and sent the files to a local photo print center (I used a warehouse club photo lab, as they still generate the volumes to remain operational).  I then printed the biographical information on heavy stock bond paper, affixed the photos onto the pages, and then placed them in the clear pockets.

The start of the album shows the names of the ancestors in the album in a tree format, with my cousin at the very bottom of the page.  The album portraits start with the oldest of our ancestors and work forward, with my cousin and spouse on the final page.  It took me a good six months to get the whole thing put together, with many weekends devoted to little else!

My cousin was so taken with the album that I created a more “generic” version for the rest of my cousins and for my brother.  In place of my cousin’s parents, I included a photo of my father and his two brothers to keep it generational, and printed a more standard photo book to send to the rest of the family.

One of my first cousins on my mother’s side was married a year later and I intended to create an album for her from the maternal side of my family, but I didn’t have the time to devote to it.  Since then I’ve slowly worked on it, though, and hope to complete it before the end of the year.

After that, my big challenge will be to come up with another interesting family history concept for other cousins who might get married in the future!

First cousins share 50% of our lineage through one parent each, who, by definition, are siblings.  In this case, my father had two brothers, so the children of both of my uncles share paternal ancestry with my brother and me.  By researching my paternal line, I am also researching their paternal line, so if any of them get the genealogical bug, they can use my research for their father’s line and focus on their mother’s line.  (With the caveat that my research will inevitably never be complete, so there will always be work to be done on the paternal line too!)

By focusing on the ancestry of first cousins on either side of my family, I am able to break down the workload into two more manageable groups.  The two projects will have been comprehensive from my perspective and when complete, I’ll have all of the photographs and portraits of my ancestry in two albums, which I can then combine for my brother and me.


Posted by Daniel Woodruff at 6:28 PM