Inherited Objects Tell Their Own Tales

In my family, both immediate and more broadly, I have the reputation as the one to whom family items can be entrusted.  Relatives near (my parents, uncles, aunts) and more distant (a half-second-cousin once removed, for example) have given me family artefacts, papers, books and other objects over the years. I’ve been fortunate to obtain objects from all four branches of my family.  (See my post Getting Started and Getting Organized for more information on how I segment my family research into four branches.)

From my Woodruff side, I have inherited a large collection of china that came (I had thought) from the family of my dad’s father.  I didn’t believe there was much handed down from my dad’s mother and assumed the china was all from my grandfather.  Although my grandmother was born into a wealthy Canadian family, her family lost everything in the 1929 stock market crash when she was 16 years old.  The following year, she moved to the States and started out on her own in New York City (see my post The Life of an Aspiring Actress – New York in the 1930s).  I always believed that she didn’t bring anything from her family, as they weren’t in a position to keep much.  Her mother went from living in a mansion with servants to living with strangers, her husband having abandoned her after losing the fortune, in boarding houses, so I knew that it was unlikely she would have had any fine china to give her daughter.  I proved to be wrong about this assumption when I researched my Woodruff china and found a possible connection to my grandmother’s family and the Carpathia, the famous ship that rescued survivors of the Titanic.

Read more »
Posted by Daniel Woodruff at 6:08 PM No comments:


The 73rd anniversary of the armistice of August 14, 1945 that effectively ended the war with Japan, and, therefore, World War II, is rapidly approaching.  This has motivated me to give further thought to my own family connections with World War II.

Joel Dirlam, one of my grandfathers, served in World War II (my other grandfather had earlier contracted tuberculosis and the loss of part of one of his lungs precluded him from serving) as did Joel’s first cousin once removed, John Baxter Black II.  You can read about the vast amount of information I gleaned from my grandfather’s discharge papers in an earlier blog post here and I’ve written numerous times about our cousin John Black’s influence on my interest in family history.  This is more information about John, who kept a journal (against all orders!) during his time serving in the War.  Although I have not yet reviewed John’s journal, he cites them in his self-published family history.

John’s goddaughter, Diana, recorded a video interview with John about his time in the war, just a few weeks before he died in 2015.  Diana’s parents met in England where her father-to-be was serving in the American Army as John’s Commanding Officer.  Diana’s English mother was working at Bletchley Park on Turing’s famous Bombe code breaker machine at the time they met. When they decided to marry, John made all the arrangements for the service, reception and the transport of bridesmaids to and from the ceremony. When Diana was born, her parents named John as her godfather. Recently, Diana asked me for my input on the reading of some of John’s remembrances in the context of a preamble to her video interview.  This prompted me to research what, exactly, John had committed to paper about his wartime experiences.

Read more »
Posted by Daniel Woodruff at 5:02 PM No comments:

I subscribe to the Weekly Genealogist, an email newsletter published (as you might have guessed, on a weekly basis) by the New England Historic and Genealogical Society (NEHGS).  It’s a great newsletter, with updates on NEHGS databases, webinars, in-person seminars, collection acquisitions, etc.  The newsletter also includes a mini newsfeed, providing links to articles of interest from other sources, as well as blogs and articles on various areas of interest to genealogists.

It’s an informative and interesting read each week, but there’s one aspect of the newsletter that I find most compelling: they include a reader survey, with questions I always find of interest.  The newsletter also provides the results from the prior week poll and selected stories that were shared by subscribers that relate to their own survey responses.  Inevitably, as summer approached, one such poll question was “[Do] you plan to travel for genealogical purposes this summer” with multiple options for answers, including visits to libraries/societies; visits to ancestral towns/cities; attendance at a genealogical convention or seminar, etc.

This struck me because most summers I do travel to visit relatives, ancestral locales and to institutions to conduct research.  This summer I am still in the first year of a new job, so the opportunity for taking time off is limited – plus, the summer is our crunch time at work: I am traveling, but not for my own purposes!

Seeing this poll question did cause me to reflect, though, on past travel that I’ve taken for genealogical reasons or even just to places that played a role in my family’s history.

Read more »
Posted by Daniel Woodruff at 9:18 AM No comments:

A New Royal Baby and Cousin

Although this new English cousin and I will never meet, I do have a large contingent of cousins in England who are more accessible.  They’re not really close from a lineage perspective (a lot closer than the Prince of Cambridge!), but they are important to me nonetheless, because I’ve gotten to know a good number of them well.  I have four second cousins once-removed (siblings) and a whole lot more third cousins (and third cousins once-removed!) in the UK.

They are from a good solid upper middle class background and the four siblings (who are my mother’s second cousins) have welcomed me into their homes and lives, for which I am grateful.  They have children, some of whom have children of their own, thus my thirds and thirds-once, mentioned above.

One difficulty for genealogists in the UK is that many of their vital statistics records were destroyed or simply not kept in the 17th Century during the UK Civil War.  It is very difficult for anyone of UK heritage, particularly in England, to trace their families past the 1700s.  Royal and noble lineages were still carefully maintained, but a large swath of the “regular people” are not able to get back into the 1600s.

My UK cousins, although part of neither royalty nor nobility in the past few centuries, are able to trace a part of their lineage back to William the Conqueror and beyond.  Although their 17th century family records largely fell to the same fate as the bulk of their countrymen, nonetheless they can make that connection.  Here’s how:

Read more »
Posted by Daniel Woodruff at 3:43 PM No comments:

Thomas Sharp, my great-great-great-grandfather (b 16 Feb 1808; d 9 Sept 1896, both in Salem, OH) was described as “a curmudgeonly agnostic abolitionist Quaker”[1]

Married to Sarah Antrim in 1830, they had four daughters and one son.  My great-grandmother, Reba Baxter, was the daughter of their middle child, Elizabeth (“Lizzie”) Sharp and her husband, John Lendrum Baxter.

Thomas and Sarah became Hicksite Quakers, following the more restrictive doctrine (plain clothing and few personal niceties), which held that divinity is achieved through obedience to the “inner light”.  In fact, the doctrine rejected the virgin birth of Christ and held that Jesus was the son of God only in that he had achieved this harmony with his inner light.

Read more »
Posted by Daniel Woodruff at 3:20 PM No comments: 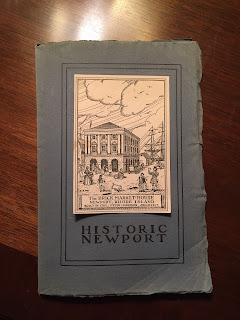 Wishing you a peaceful New Year.


Posted by Daniel Woodruff at 6:37 PM No comments: