I spent last Christmas in Newport, Rhode Island visiting with cousins and an aunt who live there.  (Some of our ancestors were original settlers of Aquidneck Island and we’ve had a presence in Newport ever since, but that’s a future topic.)  This Christmas in Newport, I gave the same gift to a number of my family members, purchasing one for myself as well: the new biography of Edward Gorey by Mark Dery.  This book, Born to be Posthumous, was perfect for the family, as we all admire and appreciate Edward Gorey’s macabre and unusual art and writing styles.  Ask anyone in our family who is their favorite Gashlycrumb Tiny and we will, to a person, answer Neville.  (He died of ennui.)  My cousin Sophy, always on the same wavelength with me, gave me a copy for Christmas too.  Luckily, I divide time between Atlanta and DC, so we now have a copy in each residence. 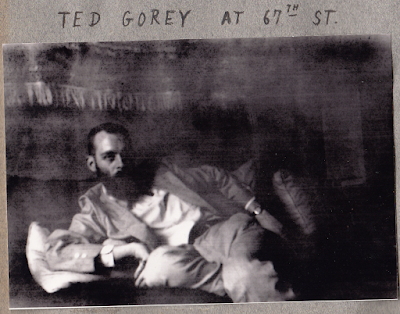 Along with the book, I was able to share with them more information which came as a surprise to them: we have a family connection to Edward Gorey!  My mother’s second cousin, John Black (whose name and photograph you have seen in other of my blog postings), was a Harvard classmate of “Ted” Gorey, as they knew him then.  Before he died, John asked me to scan and print some select photos from an album he had collected in the 1950s and 1960s.  Two of those photos were of his friend Ted Gorey reclined on a couch (or a sofa, as I think Gorey would have called it) in John’s apartment on the Upper East Side in New York City.  There is no date on the two photos, but other photos on the page are dated 1953 and 1963, so the Gorey photos could date from anytime in the 1950s or early 1960s.  When I saw the Gorey photos, I quizzed John about the connection, which is when I found that they were Harvard classmates.  He also told me an amusing story about Gorey that I’ll get into later in this post.

A few weeks later I was getting caught up on unread periodicals and found the latest alumni magazine from my alma mater, Occidental College (“Oxy”), in Los Angeles.  To my surprise, I saw an article feature concerning Mark Dery and this new book of his.  Turns out he is also an Occidental College graduate, 3 years ahead of me (as is his wife), yet another small world coincidence!  I immediately wrote an email to the editor of the magazine to exclaim on the fact that this had been my primary Christmas gift to my family this year and to share the family connection.  I also sent a scan of one of the photos from John’s album (right) and invited the editor to share my email and the photo with Dery if the school were so inclined.  Within 30 minutes of pressing “send” on that email I received an email from Mark Dery, the author, himself!
Read more »
Posted by Daniel Woodruff at 6:33 PM No comments:

Email ThisBlogThis!Share to TwitterShare to FacebookShare to Pinterest
Labels: Historical Figures and Events, In Their Own Words, Who Were They?
Newer Posts Older Posts Home
Subscribe to: Posts (Atom)