Around 25 years ago, an uncle on my father’s side, knowing my interest in preserving and keeping important family relics, gave me a photo album of a 1901 family trip to Europe. My great-great grandparents took two of their three sons, my great-grandfather included, on a two-month grand tour and documented it in photographs. The photographs and annotations indicate that they visited Scotland, England, and Wales on arrival, then went to the Continent to visit France, Switzerland, Germany, and the Netherlands.


There is no other account of this trip, however the photographs, notes, and available online records provide a wealth of information that has allowed me to perform further research and learn quite a bit about their holiday. I’m particularly grateful to have this album because it contains the only photographs I possess for these family members.

Frederick (“Fred”) Orr Woodruff and Fannie (Sturtevant) Woodruff were my great-great grandparents. Fred had been educated at Wheelers Preparatory School in Boston, MA and then entered the publishing business, which he left in 1891 to enter real estate. At the time of this trip he was 45 years old and was a prominent real estate developer in Boston and New York City. Fannie was a graduate of Wheaton Academy, was involved in Boston charities, and described as “an artist.” She was 43 years old at the time of this trip. Their family resided in Lexington, MA.

The two sons who accompanied them on this trip were Frederick Scott Woodruff (“Scott”) and Lewis Sturtevant Woodruff.

Scott was 14 at the time of the trip. Scott later joined the Navy during World War I, advancing to the rank of Lieutenant. He died at the age of 49 in 1936, unmarried with no children.

Lewis, my great-grandfather, was 20 when the family went to Europe. He was educated at Stones Preparatory Academy and Williams College. He met my great-grandmother, Mildred Hoyt, the following year in 1902, and they were married in 1904. Because of a series of unsuccessful financial schemes and, possibly, other behavior, Mildred divorced him and was remarried in 1916, her two young sons being then raised by her new husband. Lewis married again, to Adelia (Johnson) Gates and they had two children. Lewis died in 1933 in the Monson State Hospital in Monson, MA.

Fred and Fannie’s third son, Albert William Woodruff was 19 at the time of the trip, and there’s nothing to indicate the reason he didn’t accompany his family. He later had two different wives, but I have been unable to locate any children from either marriage. He died at the age of 68 in 1950.

About the photo album:

The photos are affixed on cardboard pages, which were originally bound with wire within two covers. There are 81 inserts, or 162 pages. Most pages have two photos, but some have one and a few have three or four. There are just a few pages with no photos on them at all. Most of the pages are numbered on at least one side, so it’s relatively easy to know the original order.

Most of the pages are labelled with the location of the photos, although they don’t always seem to be in the order of their visits. For example, Eton, England appears in three different places in the album. Perhaps they visited Eton three times, but if one were to follow the order of the photos, they toured England in a series of great circles!

The pages are now separated and individually preserved in acid free sleeves, and stored in an archival box. I have scanned all the pages and the covers. I did not take a photograph of the album intact, which I now regret, but I am not planning to reassemble the album just for that purpose.

Their travels were quite extensive and I have been able to piece together a rough itinerary and some information regarding their departure and arrivals, all starting from the photos and notes in the album.

Since Fred appears in photographs taken only during their time on the Continent, presumably the rest of the family spent the time before his arrival and after his departure in Scotland, Wales, and England. It’s quite likely that those photographs, although grouped together at the start of the album, may have been taken at the start and end of their trip.

About the ship and the crossing:

The first important information comes from page 1 of the album, dated “July 4th, 1901,” identifying the ship as the “Steamer Commonwealth.”

The Commonwealth was launched in Liverpool, England for the Dominion Line on October 4, 1900 and had sailed for less than a year when this voyage occurred. The Commonwealth made the Liverpool-Boston run regularly and made the journey in seven days. There were three classes of service, with first (or “Saloon”) class, second (or “cabin”) class, and third class, better known as “steerage.”

Besides Fannie’s own contemporaneous dating of the photographs, a ship’s manifest provide the dates that I cited above, that they departed Boston on July 4, 1901 and arrived in Liverpool July 11. Fred following the family, arrived in Liverpool, also sailing on the Commonwealth, on August 9.

The Commonwealth was renamed Canopic in 1903 when the White Star Line took over Dominion’s Boston and Mediterranean service. She was entered into war service in 1917, went back into commercial service after World War I, serving the Liverpool-Quebec-Montréal route, and was decommissioned in 1925.


The family traveled in first class, as indicated on the manifests. This is further supported by the photos in the album. They took photographs of fellow passenger Henry Cabot Lodge on the voyage (it is unlikely that he would have traveled in any other class) and from photographic evidence of a child on the first class promenade in the album, which matches a publicity shot of the ship’s first class promenade posted to a Reddit group that documents the old ocean liners. 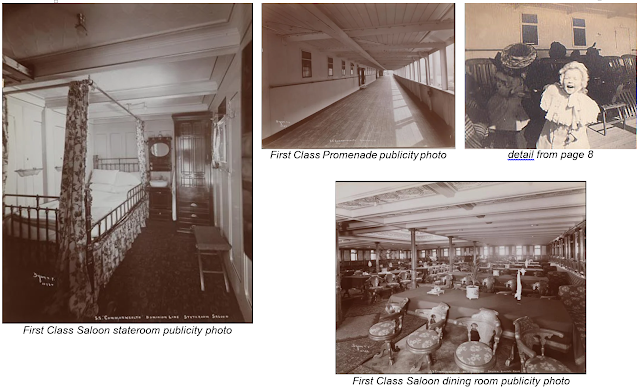 As the ship neared the end of its journey, it paused at Queenstown (now Cobb), Ireland, near Cork, for an interesting exchange.

Posted by Daniel Woodruff at 10:15 AM

Email ThisBlogThis!Share to TwitterShare to FacebookShare to Pinterest
Labels: Historical Figures and Events, In Their Own Words, The Learning Curve, Who Were They?