I subscribe to the Weekly Genealogist, an email newsletter published (as you might have guessed, on a weekly basis) by the New England Historic and Genealogical Society (NEHGS).  It’s a great newsletter, with updates on NEHGS databases, webinars, in-person seminars, collection acquisitions, etc.  The newsletter also includes a mini newsfeed, providing links to articles of interest from other sources, as well as blogs and articles on various areas of interest to genealogists.

It’s an informative and interesting read each week, but there’s one aspect of the newsletter that I find most compelling: they include a reader survey, with questions I always find of interest.  The newsletter also provides the results from the prior week poll and selected stories that were shared by subscribers that relate to their own survey responses.  Inevitably, as summer approached, one such poll question was “[Do] you plan to travel for genealogical purposes this summer” with multiple options for answers, including visits to libraries/societies; visits to ancestral towns/cities; attendance at a genealogical convention or seminar, etc.

This struck me because most summers I do travel to visit relatives, ancestral locales and to institutions to conduct research.  This summer I am still in the first year of a new job, so the opportunity for taking time off is limited – plus, the summer is our crunch time at work: I am traveling, but not for my own purposes!

Seeing this poll question did cause me to reflect, though, on past travel that I’ve taken for genealogical reasons or even just to places that played a role in my family’s history.

I think I can pinpoint the first time I traveled to an ancestral locale – I was 9 years old and my father took me to the funeral service for his mother, Patricia Bunting Woodruff, who died in 1973.  She was buried in her husband’s family plot (he was Lewis Sturtevant Woodruff, Jr.), the Hoyt plot in the Green River Cemetery in Greenfield, MA. The plot was established in 1904 when Charles Chamberlain “CC” Hoyt, Lewis’ grandfather, died.  At the time, three generations were buried there, my grandmother and her husband, Lewis, who predeceased her included.  Greenfield was that branch’s family seat in 1904 and although no one in the family has lived in Greenfield for more than a century now, it is still a place of pilgrimage for our family, and some of us will be buried there still.

I’ve been back to Greenfield at least three times since, once to bury my own father there and much more recently to map it out for other family members who may want to make a visit.  I was there last in 2016, when I took extensive photographs and then drew up a map of the cemetery, where it can be found in Greenfield and exactly where the plot can be found in the “old part” of the cemetery.  I sent this last to an uncle who told me that he had spent an hour driving the grounds one time searching for our plot.
Other cemeteries have been similar destinations, Pendleton Hill in North Stonington, CT and a very odd cemetery in Preston, CT that was attached to the Norwich State Hospital, now abandoned, where my great-grandfather was a doctor for many years.  He, his wife, and one of their daughters are buried in this cemetery next to the abandoned hospital grounds.  Another cemetery oft visited is in Mansfield, OH, where another great grandfather and numerous other ancestors from farther back are buried, as well as more contemporary cousins. 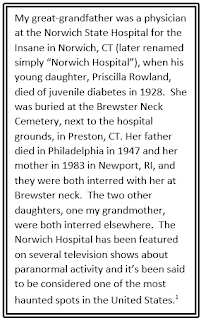 Mansfield, OH is an old ancestral locale, where one set of great-grandparents were born and where my grandfather, their son, was also born.  I’ve made many visits to Mansfield over the years – I have numerous cousins who still live there.

But it’s not all about cemeteries! I’ve visited far more places where my ancestors lived their lives, finding their former homes and places of business and getting to know the locales that were important to them. For example, my great-great-grandfather CC Hoyt had a summer house in Ogunquit, Maine and, indeed, owned much of the small town’s waterfront in 1904 when he died.  His daughter (my father’s grandmother) inherited a house there.  My father had fond memories of sailing there when he was young and he introduced me to its beaches when I was a child.  As an adult, I took a map of CC Hoyt’s landholdings (obtained from his estate documents) and walked the property, now occupied by neighborhoods, marinas and much of the downtown area.  His old house is still there too, now a hotel!

I traveled to England in 2002 with my grandfather to meet his cousins there and I have returned to the “Old Country” many times since.  I’ve made several trips to Cambridge to walk the streets and find the location of the parish church in which my immigrant ancestor was baptized (I found the current-day church, ten blocks from the original location, which is now a small garden with a monument to the original church).  I’ve also visited England to attend a research seminar at the Society of Genealogists there – who could resist a week-long visit to London for “research purposes”??

I have colonial ancestors who settled in Boston, a city I’ve visited numerous times for genealogical purposes.  Mostly it’s been to perform research at the NEHGS, but I’ve visited also to visit historic sites and to view a statue of Mary Barrett Dyer, an ancestor whose rendering (but not likeness, as no one knows what she may have looked like) resides on the Massachusetts State House grounds on Beacon Hill.

I once walked through downtown Montreal with my step-son to find places that were important to my grandmother Patricia Bunting (who grew up there) and her family.  I found a number of spots where family homes had been located, all now occupied by steel and glass towers!  But I did find two buildings still standing: the old section of the Montreal General Hospital, which once housed the Samaritan Hospital for Women, co-founded by my ancestor, Dr. Arthur Lapthorn Smith; and a section of row houses that now make up administrative offices for McGill University – one of which housed my grandmother and her family for a time (the street numbering has changed, so I couldn’t pinpoint the specific townhouse).

The place with a strong and compelling connection to my past in which I’ve spent the most time is Newport, Rhode Island.  Aquidneck Island, where Newport is the southern-most of three towns, was originally settled by a group led by my ancestor, Anne Hutchinson (at the invitation of Roger Williams), and my family history is inextricably tied to this very old and important island community.  I can walk the streets of Newport and see family names everywhere: Greene, Bannister, Carr, Bowen, Clarke, to name a few.  My great grandmother, Catherine “Kate” Stevens Burdick, was born in Newport in 1883 and died there in 1983 having celebrated her 100th birthday there earlier in the year.

I still have an aunt and first cousin (along with her family) who live on Aquidneck Island and I visit as often as I can.  I lived in Newport for a few years in the 1980s, adding to my sense of nostalgia.  I find it interesting that when I lived in Newport I had not yet begun my genealogical journey, so I didn’t quite appreciate the personal family history that was present in my daily life there.  My grandmother (who was the daughter of Kate Burdick, my centenarian great grandmother) knew and was glad that I had settled there, at least for a time, adding to the modern family history in the town.

There are many other places on my list of family sites – mostly in New England, but some abroad as well.  I’d like to spend some time in Portland, Maine (I was there in my childhood, but never for family reasons).  I’d like to go to Ireland to try to track down some of my ancestors there, and to see Ireland in general, a country I’ve not yet visited.

One thing I am always clear about: no matter what the history of the places I visit and the long-distant connections I might have, they’re still vibrant and interesting places today as well, with much to discover and learn.  I may have an interest in understanding my historical connection to a location's past, but that’s not all there is!  My father’s first cousin Sande once cautioned me “Don’t live just in the past, Daniel” and I am careful not to.

Greenfield, Massachusetts; London, England; Newport, Rhode Island; Montreal, Canada; Oqunquit, Maine; these and all of the other great places I’ve visited for family history reasons have their own vibrant and important scenes today – people to meet, food to try, locals to quiz and life to live!  Go forth and find the places of your ancestry, but don’t lose sight of what those places offer today – you’ll do your ancestors a disservice: today’s iteration of their cities and towns reflects today’s iteration of their own lives in the personage of you and your current generation.  Embrace today as you find out more about the past!

Consider creating a timeline with a chart of places your ancestors lived in the past.  A similar chart showed me that I have 27 ancestors who lived in New York City (or in its predecessor, New Amsterdam), including the first American-born mayor of New York!  The chart also showed that all four of my grandparents lived in New York at about the same time in the 1930s with one couple marrying there in 1936 and the other couple in 1941.

They moved in different circles and did not meet until my parents introduced them 25 years later.  Then in the 1960s, my parents lived in New York, in fact some of my earliest memories are from New York.  I then lived there as an adult in the late 1980s.

My first ancestors in New York lived there for 150 years before they moved on.  I had a set of immigrant ancestors who landed there 75 years after, around 1855, but they didn't stay long.  Then the timeline was renewed by my great-grandmother, all four of my grandparents, my parents and then me.  Who knows what you’ll find if you start to sort your ancestors by geographic location? 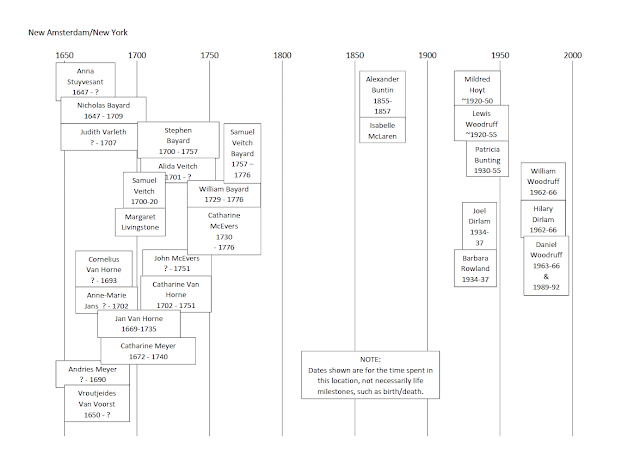 Posted by Daniel Woodruff at 9:18 AM