Inherited Objects Tell Their Own Tales

In my family, both immediate and more broadly, I have the reputation as the one to whom family items can be entrusted.  Relatives near (my parents, uncles, aunts) and more distant (a half-second-cousin once removed, for example) have given me family artefacts, papers, books and other objects over the years. I’ve been fortunate to obtain objects from all four branches of my family.  (See my post Getting Started and Getting Organized for more information on how I segment my family research into four branches.)

From my Woodruff side, I have inherited a large collection of china that came (I had thought) from the family of my dad’s father.  I didn’t believe there was much handed down from my dad’s mother and assumed the china was all from my grandfather.  Although my grandmother was born into a wealthy Canadian family, her family lost everything in the 1929 stock market crash when she was 16 years old.  The following year, she moved to the States and started out on her own in New York City (see my post The Life of an Aspiring Actress – New York in the 1930s).  I always believed that she didn’t bring anything from her family, as they weren’t in a position to keep much.  Her mother went from living in a mansion with servants to living with strangers, her husband having abandoned her after losing the fortune, in boarding houses, so I knew that it was unlikely she would have had any fine china to give her daughter.  I proved to be wrong about this assumption when I researched my Woodruff china and found a possible connection to my grandmother’s family and the Carpathia, the famous ship that rescued survivors of the Titanic.

A small set of the Woodruff china is a lidded tureen with matching cups, perhaps for coffee.  It is an odd combination, but I always assumed they were all that was left of a larger collection.

One day I was assessing the china for insurance purposes, so when I came across the tureen and cups I gave them more scrutiny than I had in the past.  Oddly, the cups had no markings at all on them – they’re fine bone china, so I found it odd that there was no maker’s mark.  The tureen, on examination, did have a mark and it was one that I found fascinating.  It was marked “Nippon” and “The Carpathia”. 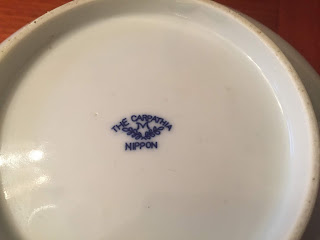 A quick look online confirmed my assumption that “Nippon” was not a manufacturer but an indication that it was manufactured in Japan.  Porcelain exported from Japan between 1891 and 1921 was marked with “Nippon” after which the marking was changed to “Japan.” As to the other marking, if memory served me correctly, the Carpathia was a ship that came to the rescue of survivors of the Titanic.

The Carpathia was, indeed, the first ship to reach the Titanic after the disaster.  A Cunard line ship, in April 1912 the Carpathia took on 705 of the Titanic’s survivors, earning its place in history.  The ship entered into service in 1903 and alternated between Atlantic crossings and Mediterranean service.  The Carpathia was sunk by German torpedoes in 1918 during World War I.

So, how does this tureen with the Carpathia markings relate to the ship?  My first step was to do an Internet search on the markings.  Indeed, I found other tureens and china pieces with the same markings and much speculation as to the origins.  I found no definitive answer as to the origins of the mark, but the speculation is that the pieces were, indeed, service items from the Carpathia.  Because it was all produced en masse for the ship, it was probably not marked with anything other than the ship’s name.

The cups, with their matching design, didn’t bear the ship’s name, so it’s possible that they were made in greater numbers for use across multiple Cunard line ships.  One would assume that they would have borne the Cunard name, but because the cup pattern matches the tureen patter, the cups clearly have some connection to the Carpathia mark. 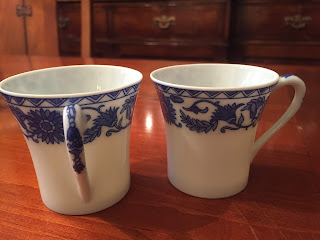 My guess is that the tureen was sold as a Carpathia-specific souvenir in their gift shop and they also sold the more generic cups as well.  Operating under this assumption, that the pieces were purchased as travel souvenirs, I still didn’t know who bought the set.  Was it one of my ancestors making a crossing?  Or was it a gift from someone else who had sailed on the Carpathia, later given to my ancestor?  These are clearly not the only two possibilities, but they struck me as the most probable.

In the period from 1903 to 1918, there were any number of them who could have sailed on the Carpathia, so I made a list and started searching!  During this 15 year time frame (1903 to 1918), my ancestors on the Woodruff side sorted themselves out as follows:

Both sets of great-grandparents would also have been prospects.  They were mostly in their late teens (one was 22) in 1903 and both couples married during the period that the Carpathia sailed.  One couple divorced during that time period as well, both re-marrying.  Could any of these couples have gone to Europe for their honeymoon?

I realized that it could not have been either of my grandparents on that side – they were 5 and 10 years old at the time of the Carpathia’s sinking.  Even if they had sailed on the Carpathia, it would have been an older relative making the decision to purchase the china.

This left me with nine ancestors  to research (ten if I included my great-great-grandfather, CC Hoyt, who died a year after the Carpathia entered service, but I saw him as a distant possibility).  It could have been any of them, although I assumed it would be the elder, more settled generation.  They all had ties in England and further afield in Europe and they were all of a class that could afford to sail in style on the Cunard line and purchase china as a souvenir of their voyage.  The ocean liners were the only way to travel to Europe, so the crossing was a common mode of transportation for anyone with business or family on the other side of the Atlantic.

I started the search process on four sites: Ancestry, Google, Family Search and American Ancestors.  I went down the list, name by name on each of the sites to see if I could make any connection.  I researched each of them individually, searching each name, the Carpathia, and the date range of Carpathia’s service.  Then, after getting a good way through my list of names (and, incidentally, finding no match in the elder generation), I found a possible connection!

On 14 September, 1905, “Alleen Smith” disembarked from the Carpathia in New York.  She was listed as a single female and, disconcertingly, as a US citizen.  I have a Canadian great-grandmother who would have been several months shy of her 19th birthday in September 1905.  Her full name was Alexandra Victoria Aileen Smith, but she went by Aileen. 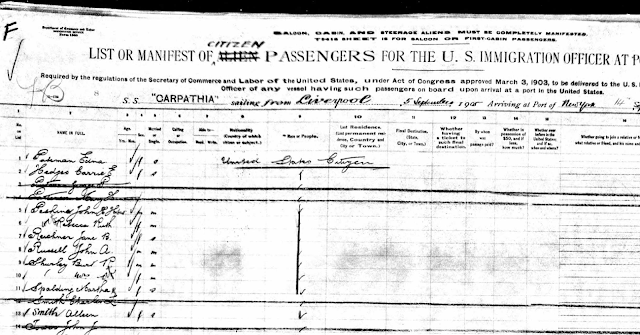 On examination, I determined that the passenger manifest was a list of passengers compiled by the crew of the ship and provided to the US officials on arrival at New York.  The page on which Alleen appears lists US citizens traveling in First Class or Saloon Class (one step below First).  This is not an official border crossing document, but rather a list of people for the border agents to use as a cross reference.

Aileen was a wealthy young Canadian socialite with cousins in England, Scotland and even one Canadian cousin who had married a Florentine count.  An 18 year old Canadian of that class coming back from a grand tour of Europe after coming of age would easily have acted, sounded and appeared exactly like a young New York socialite of the time.  If Aileen made such a trip, a purser could easily have mistaken her for a US citizen and made an error on a passenger manifest entry. Clearly I am operating under the assumption that “Alleen” was a misspelling of “Aileen.”

Aileen was born in 1886, a year in which her name was not terribly common (“Eileen” was three times more popular).  The name “Alleen” was even less common.  Babies named Aileen that year were more than double those named Alleen.  Aileen was not a name that one would come across every day in a ship’s manifest of passengers, and Alleen would been more of a surprise.  The toughest part of confirming that this is my great-grandmother here is, of course, her surname, Smith, which would appear numerous times on every manifest!
I have access to parcels of letters she wrote to her fiancé (my great-grandfather) a few years later – perhaps in one of those letters she mentions a trip to Europe.  We shall see when I have the time to read through them.  In the meantime, I’m happy to believe that there’s a good possibility that the woman on the Carpathia manifest is my great-grandmother and that she purchased the Carpathia tureen and the matching cups as a souvenir of her grand tour of Europe at the age of 18.

That Alleen Smith is on the manifest that includes first class passengers matches her lifestyle at the time (sadly wiped out completely by the Crash of 1929). The closeness of the spelling of her name isn’t a worry for me.  All of this speculation is made easier because I have the tureen, no other family connection to the Carpathia and the circumstances match her family circumstances.  I’m happy to draw all these conclusions until I can gain further information.

First, the ship manifest resources available on-line are significant.  I have records of other family members’ crossings as a result of these databases, which helps to increase my knowledge of their lives, thereby increasing my knowledge of them.

Second, it’s OK to guess at connections such as this.  I am not making a genealogical assumption, nor am I drawing any conclusions in this other than a possible trip taken by an ancestor that would explain a bowl I inherited.  I am being careful to not state as fact anything that is not.  In this instance, though, I feel comfortable drawing more tenuous conclusions than I would were this a question of lineage or ancestry.

Finally, you never know where a quick insurance assessment document will take you.  I don’t recall ever looking at the tureen’s markings before.  In making up an insurance inventory I was thrown into a much bigger family history research project.  What a great result from a mundane task! 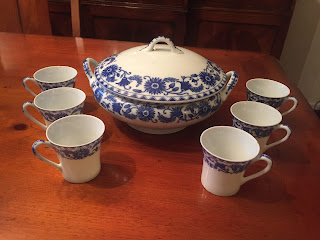 Posted by Daniel Woodruff at 6:08 PM