Will the Real Matthew Woodruff Please Stand Up? (part 2 of 2)

Part 1 left us with the interesting coincidence of my consultations with the Society of Genealogists in London about the origins of Matthew Woodruff, my immigrant Woodruff ancestor, being immediately followed by outreach from a distant cousin, Leonard Lee Woodruff, who had further information to provide about Matthew.

I found it fascinating that Leonard emailed for the first time, after finding our DNA match, to ask if I had any information on the very topic I’d addressed the prior day!  After I shared my information with him, he sent me copies of what he had, which added to my own knowledge.  The documents he sent me in October 2011 included the results of three separate research projects that he had commissioned.  He later copied me on the results of a fourth project in January 2012.

What more was I going to learn about our immigrant ancestor, Matthew Woodruff of Farmington, Connecticut?

1.   Search of the neighboring parishes to All Saints.

This project provided two more generations of information prior to Matthew Senior, with the location of records in the Parish Register of the St Vigor parish in Fulbourn, Cambridgeshire; the Archdeaconry Court of Ely Administration; and the Lay Subsidies of Fulbourn.  They provided a transcription of the Will of Matthew Senior’s grandfather, John Woodruff Senior (b bef. 1501 – d aft. 1550).

2. Find any additional mentions of the Woodruff surname in the Fulbourn records.

Their research revealed three references to John Woodruff in the Fulbourn Lay Subsidies, substantiating the John Woodruff connections from the first research.

The researchers raise the question, could he be related to the Woodrove family of Woolley?

3. Prove or disprove the Woodruff family in Cambridge is related to the immigrant Matthew.

There was little of note in this part of this commission – a reiteration of much of the previous information, true or otherwise, that has been published.

The fourth project was conducted by Dr. Karen Cummings in Haverill, Suffolk, England:

She was unable to locate wills for either party.

The research commissioned and very generously shared by Leonard Woodruff of Iowa was comprehensive in that it provided documentation for three generations of the Woodruff line in the Cambridge area of England.  And his research matched the research I performed in 2007 in identifying the parents and siblings (with the exception of the first child, Grace, bap 1590) of the assumed immigrant, Matthew – clearly we had seen many of the same records.

One additional connection I believe I can make between the two sets of research is the identification of a record I found but previously could not match to an individual:

Leonard’s research has identified the matriarch of the Woodruff family at the time, Alice (_____) Woodruff, wife of John Woodruff, and also that John died in 1592 with his wife surviving him.  I believe we can safely attribute this burial, four years after John’s death, to Alice, wife of John.

Because the records of the parishes near All Saints, Cambridge were searched, and because other life events for Matthew in the 17th century were not located by either Leonard Woodruff’s researchers nor in my research at the SOG in 2011, further strength is given to the theory that Matthew left the region.  This, in turn, lends strength to the circumstantial argument that he is the immigrant ancestor to Farmington, CT.

More recently, additional vital statistic records from England have been compiled and put online by FamilySearch.org.  These additions turned up more references to the name Matthew Woodruff (under a variety of spellings) in England during the time period in question.

There were thirty-four birth, marriage and death records that made reference to Matthew Woodruff when I last performed an online search.  Of these records, only three fell within an acceptable age range for the life-events of our Matthew:[i]

It is unlikely that Matthew from Cambridge would have moved to one of these other locations, the closest of which to Cambridge is about 60 miles.  However, due diligence required a search of records to see if there were a possible connection.  If one of these three indicated Matthew from Cambridge, then where would that leave us?   The father of the first could still have been the immigrant ancestor, so even if we don’t connect him to Matthew of Cambridge, he might be Matthew of Farmington, adding further interest in him.  The second and third clearly couldn’t be the immigrant, as they lived and died in England, whether or not they were Matthew of Cambridge.

Searches of Hertfordshire, Wiltshire and Kent revealed the following:

Tring, Hertfordshire records show that in addition to the young Matthew who died at the age of three in 1638, Matthew, his father, had at least three other children:  Thomas Woodroff, b 1626; Daniel Woodroff, b 1632; and Susan Woodroff, b 1639.  Given that Matthew from Cambridge was born in 1616, he could not have been the father of Thomas in 1626, so this Matthew in Tring, Hertfordshire (the closest of the three locations to Cambridge) is clearly not the Cambridge Matthew.  Additionally, Matthew of Tring would have been born no later than 1605 or so, which makes him too old to be Matthew of Farmington.

Turning to Wiltshire, the fact that the deceased is “Matthew, son of Matthew” seems compelling.  If he were the Cambridge Matthew, he would have been 65 years old or so at his death in Wiltshire in 1681.  In searching the Wiltshire records for Matthew Woodruff, we discover that Matthew Woodroffe of Calne, Wiltshire had five children, the eldest, Thomas Woodroffe, born in 1631.  If this same Matthew were the Cambridge Matthew, he would have been 15 years old at the time of this son’s birth.  This is not unknown, but it is very unlikely that a 15 year old would move over 100 miles from home and start having children in rapid succession.  My conclusion is that this “Matthew, son of Matthew” who died in 1681 would have to have been born by 1610 or so to match the birth date of his son Thomas.  We, therefore, eliminate this Matthew from contention for the Matthew in Cambridge.

Looking at the Nonington, Kent Matthew Woodroffe, we calculate that if this were the Cambridge Matthew, moved to Kent, he would have been about 20 years old when he died in 1636.  In researching the records of Kent, we find that Matthew Woodroffe was born in 1577 in Sandwich, Kent, 6 miles from Nonington, location of the death record from 1636, making him about age 59 at the time of his death.  In addition, we find two children for Matthew Woodroffe: John in 1604 (theorized to be the Long Island immigrant ancestor, the other major Woodruff branch) and Martha in 1606.  Matthew would have been age 26 to 29 at their births, so the records coincide and eliminate him from contention.

This leaves us still with Matthew Woodruff of Cambridge.  Even with the new records available online, he still cannot be traced to any life events in England beyond his birth in 1616. This further increases the likelihood that he is the immigrant ancestor, with the following pedigree.

Matthew Woodruff, born 1616 in Cambridge can be traced as follows (lineal descendant names have been contemporized – John from Johannes, Matthew from Mathue, and Woodruff from Woodroofe, Woodrove, etc.) [See previous notes for specific sources]: 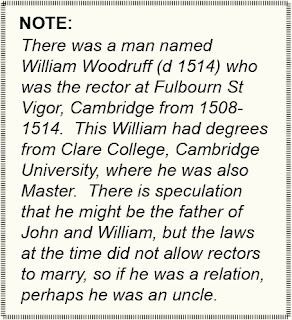 NOTE: One of their daughters married Jasper Swanne. 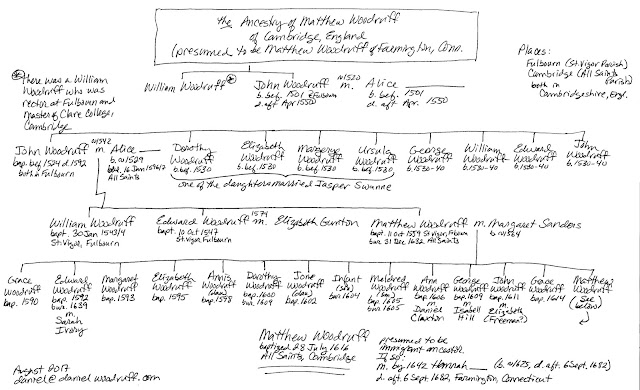 Several next steps to pursue in this research:

1. Continue to review English records, as more become accessible, to continue to attempt to identify any life events for Matthew Woodruff in 17th century England.

2. Continue to try to link the rector at St Vigor Fulbourn, Cambridgeshire, William Woderove, with the Matthew Woodruff family of Cambridge, some of whom were associated with St Vigor one generation later.  If a connection can be established, then the question posed by the researcher hired by Leonard Woodruff needs to be pursued: could this William be connected to the Woolley Woodruff family?

Process of elimination is an important tool in performing genealogical research.  Even though I thought I had a good circumstantial argument for Matthew of Cambridge as my immigrant ancestor in 2011, subsequent records published online provided proof of three individuals named Matthew Woodruff who clearly did not migrate to the Colonies.  I had to see if any of these individuals corresponded to the Cambridge Matthew – if there was a possibility that the Matthew from Cambridge was, indeed one of those who left a trail of records in England, then my theory would be proven wrong.  I also had to see if any of these newly-identified records could be connected to Matthew of Farmington, Connecticut – could one of these be the immigrant ancestor instead of Matthew of Cambridge?

Looking at each of these individuals, searching for their children, their birth and death records and correlating with their locations in England all provided compelling arguments that they were not Matthew from Cambridge.  Two proofs were made through a simple correlation of the dates of their oldest child’s birth.  The Cambridge Matthew would have been too young to father the first and would have been too young to marry to father the second.   The third was even easier – he fathered children before the Cambridge Matthew was born – plus I was able to find his birth record, so his story (which is likely relevant to the Long Island Woodruff line) was nicely filled in.

Additionally, I was able to prove that none were the immigrant ancestor.  One because he would have been too old to be our Matthew of Farmington and the other two because their English death records were located, so they weren’t Matthew of Farmington, who clearly died in Connecticut.

By examining these individuals and searching out their live events, the theory that Matthew in Cambridge is the immigrant ancestor is strengthened.


Posted by Daniel Woodruff at 8:43 PM