The Story of Annie Allender Gould

The Boxer Rebellion was a violent movement in China which targeted Christians, missionaries in particular, between 1899 and 1901.  It was initially a nationalist group (“Boxer” was the English translation for the name of this group) that pushed for expulsion of foreigners and their interests and eventually grew into a much larger movement.

When the Boxers finally blockaded the Legation Quarter of Beijing, which housed many foreigner delegations and missions, the Empress Dowager Cixi (believing that armed invasion to lift the siege was immanent) weighed in and supported the Boxers through an Imperial Decree “declaring war on foreign powers”.  This led to the killing of many foreigners and significantly more native-born Christian converts in China, mostly in the northern provinces near Beijing.

According to Wikipedia, a total of 136 Protestant missionaries, 47 Catholic nuns and priests, 53 foreign children and thousands of convert Chinese citizens were killed during the rebellion.  In all, between 2,400 and 2,600 people were killed after Empress Dowager made her proclamation supporting the Boxers.[i]

Annie Allender Gould was my great-grandfather’s first cousin and was, therefore, my first cousin three times removed.  She was also a Presbyterian missionary in China and one of the 136 Protestant missionaries killed by the Boxers.


Annie’s uncle, William Edward Gould, devoted a section of his Gould family history, written in 1914, to her.  This is an excerpt from his book, published here with my warning that the narration is graphic and could be disturbing:

Annie Allender Gould was born in Bethel, Maine, among her mother’s kindred, but lived in Portland during her girlhood. Her education began in the public schools of Portland. In 1887 she entered Mt. Holyoke Seminary (which was changed to a college while she was there), and in 1892 after having been there five years, she graduated with the valedictory honor.On August 7, 1893, she left home for the city of Pao ting fu, North China, Province of Chihli, going as a missionary of the “American Board.” She was faithfully working for the good of the women and children under her charge, when in May, 1900, the “Boxer,” or anti-foreign storm broke over that land. It was then too late to escape; or, in the language of her sister missionary (Miss Mary S. Morrill), “We cannot go if we would, and we would not if we could.” All foreigners in that Province were massacred about a month later, and also all native Christians, excepting those who contrived to hide or escape.Her work in China was first to battle with the language; there she was most successful. Within a fortnight after arrival, she had committed to memory several hymns and the Lord’s prayer, and was able to take part in the religious services as well as to lead in the singing.As fast as she acquired a knowledge of the language, her sphere of usefulness enlarged and her duties increased.  Her daily life at last was filled with many burdens and sorrows.  Miss Morrill broke down completely and was sent home –it was not known whether to recuperate or to die.  Miss Gould was left two years as the only “single lady” of the Mission, after which time Miss Morrill returned.  Miss Gould’s letters, or rather the lack of them showed plainly that the added duties were telling hard upon her, but there was no complaint.  Her last year was spent in teaching the native Christians to become teachers.  During Miss Morrill’s absence, Miss Gould took the task of “touring”, that is, of visiting the people in the country towns outside the city, but one cannot judge from the letters whether or not she like this better than other work.  She took hold of it, as in everything else, with a conscientious determination to do her best.


As the Boxer movement gained headway, touring was necessarily abandoned; despite this and the threats made first to the native Christians and later to the foreigners the ladies kept on with school, chapel, and city duties.  The work was constantly increasing until in the spring of 1900, when the Boxers, without rebuke from the Governor, began drilling in the city streets.  After this many of the natives kept away, and others feared to be even at work for the foreigners, or to show a friendliness they had been accustomed to before; but if the ladies or any of the missionaries were frightened, their letters do not show it.  Not until late in May, when the Boxers had killed several Chinese officials who tried to put them down, and had terrified the whole population, is there a note of alarm. Then came the terrible news -- the letter which was our last -- of the destruction of the railway, cutting of wires and killing of the Belgian employees on the line between Pekin and Pao ting fu.

What happened after this has been learned little by little and after long waiting and suspense. Every truth has been hidden in much exaggeration and wilful lying, so that even now it is not safe to go far into details.  We know, however, that when Admiral Seymour’s marines were repulsed in their efforts to reach Pekin, the Government was overturned and Prince Tuan, or if you please, the Empress Dowager, issued an edict to slay every foreigner in China.  This was obeyed only in a few of the Northern provinces, Chihli being one. It was not until June 30th that an actual massacre of inoffensive missionaries was attempted in Pao ting fu. On that day, the Presbyterian Mission was burned, all perishing in the flames. This awful fate was immediately made known to the little handful remaining at the American Board compound, and their last night was one of unspeakable dread and suspense. We have learned that our people spent the night in prayer, in writing good-bye letters, and in sending off the few servants and helpers who remained, excepting eight or ten who preferred to die with them. Some of these letters were hidden, while others were sent off by trusted messengers, but all were found by the Boxers, none having ever reached a friendly eye.  No last messages have come to us, save those written the last of May before noted. On Sunday, July 1st, the mob of roughs broke down the slender barrier at the American Board compound, killed Mr. Pitkin, the only white man left, and carried our two ladies inside the city. While being led across the fields. Miss Gould fainted and became unconscious. Her feet were thereupon tied, and a pole run between them and through her long hair, and thus slung after the manner in which pigs are there carried to market, while Miss Morrill walked along side; she herself was borne inside a heathen temple. Here they were soon joined by the people of the China Inland Mission.  All were knocked about during the day, and jeered at by the mob, some sort of a trial was had, but no one has yet been found who can tell what happened in those awful hours. About sundown all were led outside the wall, a great crowd following, and there they were beheaded and their bodies thrown into a common pit.In October following, the city was occupied by foreign troops, the Governor, and some others being shot, and the temple blown up.  In March a party of missionaries from Pekin, assisted by the foreign troops and all the new dignitaries, of the city, held funeral services over the dead, whose bodies were then gathered and placed in a new spot, which will have a fitting monument and will be known as the martyrs’ ground.[ii]

This additional citation is from the Find-a-Grave website (www.findagrave.com), listed without attribution, and I have been unable to locate the original source:

Aftermath:  Outrage about the crimes of the Boxers spread in the United States and Europe.  Troops were sent from several nations which killed many Chinese, occupied Peking (Bejing [sic]) and forced the government to pay indemnity to compensate for the loss of life and property.  Annie’s remains were recovered the next year and returned for burial in the Riverside Cemetery in Bethel [Maine].  Her father, along with many others, made claims against the Chinese government as compensation for her death.  He hoped to raise her estate to $8,500 which he hoped would be invested so the interest would benefit mission work.  A memorial window in her honor is at the Second Parish Presbyterian Church in Portland.  The local chapter of the Daughters of the Union Veterans was named Annie Allender Gould Tent No. 1 in her honor.[iii]

These recollections and photographs, combined with the fact that Annie was a well-loved cousin of my own great-grandfather, make this otherwise sad historic event, read about in a school book at one time, alive and vivid for me.  The tragedy of the family’s loss is clearly felt in my great-grandfather’s uncle’s recollection of his niece and therefore acts to bring her in much clearer focus for me as a person, a cousin and the victim of a great tragic event.

It is for this reason that I feel such reward from my family history endeavors: its ability to bring history alive for me, for better or for worse. 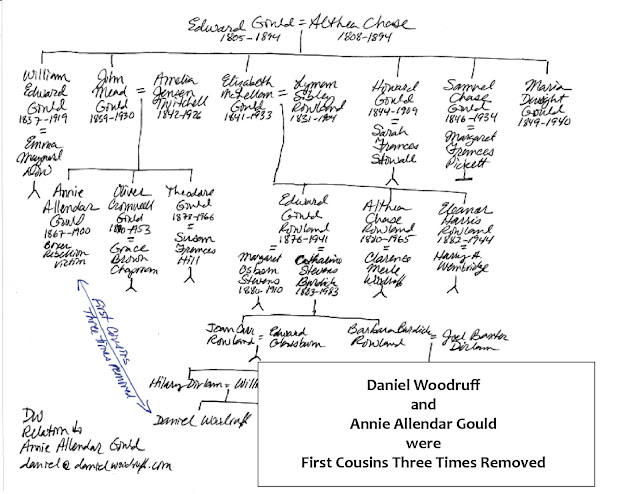 Posted by Daniel Woodruff at 8:49 PM