It was early 1990 and my grandmother, Barbara Dirlam, was organizing a small family gathering at her home in Rhode Island.  She asked if I could attend to represent my own generation and meet more family members. I was 26 years old at the time, living in northern New Jersey and I drove up for the weekend to learn more of the family.

I met all sorts of new relatives, including my grandmother’s sister, Joan and Joan’s three daughters.  I also met a fellow I never even knew existed: Barbara’s half-nephew, Ned.  This was the first I ever heard of half-cousins in the family. Little did I know that meeting cousin Ned (really my second half-cousin once removed!) would start me on a family history journey that's lasted more than 25 years since!

The story came out that Barbara and Joan’s father had been a widower when he met their mother: my great-grandfather, Edward Gould Rowland Sr, had three children by his first wife, but she died soon after the third child was born.  Then, for reasons unknown to anyone still alive, he gave up his three children for adoption to three different families.  He then re-married and my side of the family was formed.

We had a good weekend, getting to know one another and sharing stories about our respective sides of the family.  (With a passing comment about my college background, I found that I already knew Ned’s step-daughter, with whom I attended Occidental College in Los Angeles!)  We also discussed the great mystery from so many years before – why, eighty years earlier, had Edward Sr given up his three children for adoption?  We had no answers, nor even any clues as to answers, for this question.

We did spend the weekend creating an extended family tree, including both of Edward Sr’s families.  This was made more complicated by the fact that two of the three “first family” children were adopted by their deceased mother’s aunts (the third was adopted by a family friend).  I didn’t have much to contribute to the reservoir of family knowledge at this point, so in order to maximize my exposure to this new experience, I volunteered to record the family data as it was recounted, compile it into a readable format and distribute it to those gathered.  Some information was missing and different people were assigned the tasks of research to fill in the gaps.  This additional data was sent to me and I completed and send out to everyone involved the “final” packet: family tree, data sheets and our own contact information.  This was my very first family history endeavor.

My second endeavor took place just six months later.  During that first family weekend, cousin Ned told us that he had inherited a wooden trunk from his father, who was born Edward Gould Rowland Jr and so named until he was adopted, when he became Edward Gould Chalker.  Despite the adoption of his son to the Chalker family, Edward Sr chose to leave his trunk of family papers to his namesake and eldest son, who in turn left it to his son, cousin Ned.  Ned reported that he had opened The Trunk (somehow, whenever cousin Ned says “The Trunk”, it sounds capitalized) a few times, but had never had the energy to pore through it alone.  He invited us all to his place in Maryland later that year to help him look through the papers contained in The Trunk and perhaps solve the mystery of the adoptions.

It turns out that I was the only attendee at that weekend to take him up on his invitation.  However another cousin from that side of the family, the daughter of one of the other adopted children and Ned’s first cousin, Cynthia, who had been unable to attend the Rhode Island weekend, came to help. 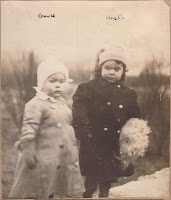 The three of us, kept well nourished by Ned’s sweet and very patient wife, spent the weekend sorting, reading and prioritizing the contents of The Trunk.  It included papers from two of my great-great-grandparents, letters, journals, sermons (he was a minister by trade) and all sorts of other documents from their generation.  Of Edward Senior, their son, there were journals, letters, medical documents (he was a medical doctor and ordained minister), newspaper clippings and photographs.

Most important, there were contemporaneous letters, journal entries and records pertaining to the adoption of the three children (shown above).  We had found the documents that would answer an eighty year old mystery!  Again, I took the role of organizing and transcribing what we found – as we sorted the papers, I wrote cover sheets for the different bundles, which we put back into The Trunk in a better semblance of order.  But we first pulled out those papers relevant to the adoption and went to a local copy center to have them photocopied (this was 1990, after all).  I took my copies home with me and sat down at my very rudimentary PC (my first computer) and transcribed all of the documents into WordPerfect files, printed them and sent them to the attendees of both weekends.

Those two weekends in 1990 were life-changing for me. It came to me that family history was more than just names and dates on a chart – our research had revealed real, flawed, sympathetic human beings who were involved in daily drama and happiness.  The stories of their lives showed the real impact they had on the lives of their descendants.  Essentially, the family history was something, as with broader history, from which to learn and grow.  I also realized that I wasn’t just interested in learning about the family, but I was interested in helping to preserve the record and tell the story. Even then, in my mid-20s, I realized that one priority had to be the protection of the information.  Thus my interest in my own family history was born.

Since that time, I have become the individual in the family to whom all documents are sent.  When my father died, I saved all his papers and photos and then went through them to cull out and preserve anything of a family interest.  Then his brother, my uncle Robert, seeing this work I had undertaken, conveyed to me for safekeeping more family letters, photos and documents.

The grandparents who hosted that weekend in 1990 died in the early and mid-2000’s, but they left a legacy of many important family journals, documents and letters that I am still slowly scanning and absorbing.  Family history work takes time and concentration, and with a regular life to lead, it is slow going.  Most annoying are those months when I have so much “real life” going on that I can’t do much genealogical work at all.  But family history is patient – it waits for me!

I still have those old transcriptions from 1990, printed on my first dot matrix printer.  We solved the adoption mystery (look for an entry on that story soon) and I have spent the intervening quarter century compiling information, working out how best to organize both my physical materials and my electronic files, drawing up charts, making mistakes, researching lines that I later had to wipe out with a single stroke and finding my amateur way through the very complex world of genealogy.  I find it interesting that I started all of this before the general popularization of the field through the various fascinating programs on television!

Thankfully, my methods have changed significantly in those 25-plus years.  Since 1990 I’ve gotten much better computers, I can make photocopies in the comfort of my own home, I can now scan documents to better preserve the record and, most transforming, I now have the Internet as a variable but important resource and as a vehicle for sharing my experiences.

This blog will help me share some of the story of this journey of mine.  Perhaps I’ll help others to avoid mistakes I’ve made. Maybe my own methods will work for you.  I’ll also share stories from my ancestors – there are some fascinating characters out there in my past and many of them are well documented!  My goal is to tell an interesting story as I share my methods, so that you can be entertained and, one hopes, find ways of improving your own approach to family history, thus making your own genealogical journey a little easier.

Posted by Daniel Woodruff at 4:55 PM