When I first started my family history research, I quickly ran into some older date notations I didn’t understand.  They were listed as two years instead of one.  For example, I would see a birth listed as 21 January 1680/1.  I had no clue what that meant, and no one to ask.

I did, however, have the Internet and I assumed that I would only be one of many amateurs who were confused by this, so I looked at Ancestry.com, at the New England Historic Genealogical Society website (AmericanAncestors.com) and other genealogy sites, thinking this would surely be addressed in their FAQ section or on some “basics of research” page.  I was wrong – I could not find any such explanation anywhere.

I did further research, finally finding a Wikipedia entry, which I paraphrase below.  At the end of this post, there is a link to the article (very interesting reading). 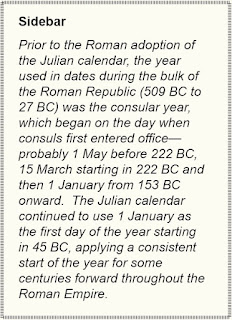 When we see old dates (prior to 1751 for dates in England and English colonies) from the first few months of the calendar, the year is sometimes listed as two years:  21 January 1680/1.

The quick explanation of these dates is that they should be read as the later year, so the correct date in our temporal terms for the example shown above us 21 January 1681.

The start of the legal year was in conflict with the calendar year from the very start of the Julian calendar, which was introduced in 45 BC, but shifting legal years occurred well before then.

This lasted until the Middle Ages when, under the influence of the Christian church, many western European countries moved the start of the year to one of several important Christian festivals—25 December (the Nativity of Jesus), 25 March (Annunciation) or Easter (in France).  In the meantime, the Byzantine Empire established the start of its year as 1 September and Russia’s year began on 1 March (until 1492 when the year was moved to 1 September).

For England and its colonies, 1 January was regarded as New Year's Day and celebrated as such, but from the 12th century until 1751 the legal year in England began on 25 March (Lady Day).  Dates recorded between 1 January and 24 March were recorded in the legal rather than the calendar year.  So, for example, the Parliamentary record lists the execution of Charles I as occurring on 30 January 1648 (legal year), although modern histories adjust the notation to 1 January to match the actual calendar year, recording the execution as occurring in 1649.  Some records may list the date showing both years, to indicate that records contemporaneous with the event will be recorded with a different year than modern records: 30 January 1648/9.

The eventual shift of legal years to the more widely accepted (and more uniform) 1 January occurred at different times in different countries.  The change was generally made prior to that country’s conversion to the Gregorian calendar from the Julian calendar.  The conversion to the Gregorian calendar was specifically related to correcting the length of the year (the Julian calendar overstated the length of the year by almost 11 minutes, resulting in an accumulated error of about three days every four centuries) and was driven by the Catholic Church.

The conversion from Julian to Gregorian reduced the year of the conversion by at least ten days (longer if the country in question converted later) and adopted a more formulaic approach to leap years.  Many Catholic-majority countries enacted the shift to Gregorian in the year it was mandated by the Vatican, in 1582.  Other countries adopted the shift across the centuries, with some taking place, Russia, for example, as late as the early 20th Century.

England, Ireland and the British colonies changed the start of the year to 1 January in 1752 (so 1751 was a year with only 282 legal days, starting on 25 March and ending on 31 December).  Later, in September 1752, the Gregorian calendar was introduced, which shortened that year by an actual ten days.  Scotland shifted to the Gregorian in 1752 along with the rest of Britain, but had changed the start of their legal year much earlier, in 1600.

Most other countries followed the Scotland plan and changed the start of the legal year to 1 January well before they adopted the Gregorian calendar.

It’s a good idea to have a protocol in mind when you start recording these dates in your own family records.  You’ll need an approach for the start of year differential and for the Julian / Gregorian shift.  This is particularly important for the start of the year notations, but can cause confusion when recording dates for individuals that span multiple countries with different Gregorian adoption dates.  When your records are read by future generations, they may want to verify some of your information – you don’t want to send them to the wrong year when they research vital statistics from your records.

There are a number of ways that historians record these dates.

You may come across these notations after a date: 30 January 1648 (OS) or 30 January 1649 (NS) to indicate whether the year listed has been adjusted for a 1 January start of year.  Unfortunately, these notations are also used to differentiate between Julian and Gregorian years, further confusing the issue: does 12 February 1632 (OS) mean that this was 12 February 1633 with the adjusted start of year or a Julian date that would actually be the equivalent of 2 February 1632 Gregorian? (Or a combination of both, 2 February 1633, adjusted Gregorian!)  The potential for confusion is the main reason that I don’t use the OS / NS notations.

There are some specific reasons a historian might include a Gregorian translation for the date of an event that took place in a Julian country, a difference of at least ten days.  Such notations will be generally tied to events that relate to one another that take place in different countries, so the actual elapsed time won’t be misconstrued.  Sailing from a Julian country to a nearby Gregorian country (where the calendar date is ten days earlier) could result in a departure date of 10 April and an arrival date of 9 April, if the trip took just nine days.  If both dates are stated in the Gregorian, then the arrival would be 19 April and there would be less confusion on the part of the reader.

Dates listed with both years indicate the legal year and the adjusted year: 30 January 1648/9.  In this case it’s easy to quickly understand.  However, this notation has been used for the Julian / Gregorian date as well!  2/12 February 1632/3 indicates that the day (2 or 12 February) has been shown in both Julian and Gregorian calendar variations along with the calendar / legal year adjustment.

For astronomers and others for whom the precise accuracy of a date is of vital importance, there are formulas for converting a contemporaneous Julian date to a current Gregorian date or to another dating concept entirely (generally dating protocols used by their professions).  In terms of general and family history, the conversion of Julian dates to Gregorian just gets messy and adds confusion.

For historians, there is an easier accepted protocol.  Prior to the introduction of Gregorian on 15 October 1582, dates are shown in the Julian calendar of the time without conversion, with the year adjusted to a calendar year 1 January start.  Dates from 16 October 1582 forward posed a challenge as different countries shifted over the course of a few centuries.

Most historians will record an event in a given country in terms of the local calendar for the day and month, but they will adjust the year to a 1 January start date.  This means that events recorded in family or general histories across different countries may be shown in both Julian and Gregorian, depending on when the countries converted.  (As Wikipedia points out, Cervantes and Shakespeare are both reported to have died on 23 April 1616, but since one was in Spain, which was on Gregorian, and one in England, which was not, they actually died ten days apart.)

My own dating approach
(let’s see how THAT turns up in search engine results!) 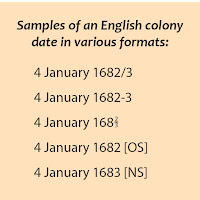 Start of Year:  In the case of my own records, I originally recorded the dates only with the adjusted year, but no “NS” [New Style] notation.  After I understood more about the significance (and the potential confusion for future researchers) of the start of year adjustment, I began to backtrack and I began using the dual-year notation, so there would be no misinterpretation in the future.  When confronted with an automated system with four-digit data entry restrictions, YYYY, I use the adjusted year.  I am slowly re-notating dates in my documents as I come across them to add in the legal year as well.

Julian / Gregorian day and month adjustments:  I record these dates as they occurred contemporaneously without “OS” or “NS” notations and the year is recorded as shown above.  I just assume that anyone reading the dates, if they care at all about the conversion, will know when that specific country switched to Gregorian.

Some events for the same individuals in my own family history took place in England in Julian time, then in the Netherlands in Gregorian time, then again in the colonies in Julian time.  I am not concerned about these minor ten-day time shifts – my goal is to write a contemporaneous record, so if someone is born on 23 May according to the local calendar, that’s what I use.  I am not concerned, almost four hundred years later, with the loss of those ten days in 1752.

It is important to understand this complex topic before you start to dive into family history research and documentation.  You need to establish the protocol that works best for you and then stick to it.  If you are creating significant written records, you may want to include an explanation of your protocol in some kind of introductory document so that future researchers will know exactly how you approached your dates.  Here is my explanation:

On dates:  My dating protocol follows the accepted genealogical standard of listing dates in the following order:  Day Month Year.  If I see a birth record written as July 16, 1862, I write it as 16 July 1862.  Events that took place between 1 January and 25 March in England and the Colonies are noted with the legal year and the calendar year (2 January 1674/5) in which the earlier year indicates the legal year (which ends on 25 March) and the later year indicates the calendar year (which started on 1 January).

Countries adopted the Gregorian calendar on a sliding schedule, losing ten or more days in the year of conversion, so 2 January did not fall on the same actual day from one country to the next.  In these cases I ignore the discrepancy unless there will be confusion from the dating discrepancy, in which case I will add a note about the calendar shift.

Posted by Daniel Woodruff at 10:40 PM